2021 started off with Republicans submitting Assembly Bill 130 / Senate Bill 164 which would have decriminalized simple marijuana possession at the state level to $100.

Of course, everything marijuana reform related was gutted from the budget again this session. Senate Republican leadership has said NO medical marijuana under their watch until the FDA regulates it for them.

In addition to the FDA stall tactic for medical marijuana, Senate Republican leadership said until a majority of the Republican Caucus supports legalization of cannabis it will be a dead issue.

So with a decriminalization bill out before the budget and currently stuck in committee, all pressure is on Republicans to present a cannabis legalization bill or all hopes are lost for even a public hearing on the issue.

A few incumbents have said if the federal barrier was removed they would consider legalization more possible. A bill could be written that would be only be implemented if the federal conflict was resolved, but Republicans have not touched that yet. A few Republican candidates that were vocal supporters of legalization have yet to offer a Republican version of a bill, nor sign on as a co-sponsor to the Democrat version.

So what is next?

Who knows with these people. It seems the Republican strategy is to put as little legislation into action and so far it looks like the Republican controlled legislature may have put the least amount of bills to the Governors desk for signing into law.

The authors behind the Kratom bill are a pretty diverse group.

Senator Felzkowski was fighting an uphill battle in the worse committee assignments ever for her legislation she authored to start a medical marijuana program in 2019.   She has sponsored a bill, giving multiple positive news statements about decriminalization, and understands a great deal about the topic of marijuana reform.  Her willingness to learn more and all the extra credit she is doing helps secure her solid rating with activists.

Friendly GOP Assembly Representatives named this guy as a possible supporter of medical cannabis reforms. I was starting to seriously doubt that.

Unfortunately, Republican Dave Murphy from Appleton has not sponsored any positive marijuana reform legislation since being elected to the State Assembly in 2012. During 2019, the Assembly Republicans circulated and prefiled a bill for the 2020 legislative session to create a medical marijuana program in Wisconsin (Assembly Bill 750) which Assembly Rep. Murphy did not co-sponsor.

February 2019 he said he would “oppose any push to legalize recreational use”, but added he would support regulated medical marijuana if it ensures the safety of public roadways. Late in the 2019-20 session, a bi-partisan effort to decriminalize 10 grams or less of marijuana in Wisconsin was introduced that did not attract Murphy as a co-sponsor.

We thought he was going to see a primary challenger in the 2020 general election, but that did not happen and his candidate statements added more reasons he is opposed.

Oct 2020 Murphy said he is against the legalization of recreational marijuana. He said he based his opinion on conversations with law enforcement officers, many of whom are against legalizing it. He pointed to issues in other states that have legalized recreational marijuana, such as California and Colorado. In those states, marijuana continues to be sold illegally, he alleges. Marijuana use can also impact worker productivity, Murphy said, which hurts the economy.

Rep Murphy said he would consider legalizing the drug for medical use.  He did not co-sponsor or even blink at the 2021 Republican decriminalization bill early this year and now offers a bill to increase penalties for butane hash oil (BHO). I hope this moves any potential Republican challengers for this district to start his campaign now!

As a candidate Cabral-Guevara said she is open to any innovative to bring in revenues, other states have legalized adult use and we know the pros and cons, many constituents have contacted her support for adult use.

For medial marijuana, she knows patients who have been prescribed marijuana and it benefits them, in a time that we are missing 2 million in revenue is it something to look at possibly.

Is her willingness to co-sponsor a bill to remove a schedule 1 drug from controlled substance act a sign or things to come. She continues to support cannabis reform in public when asked and the only thing left for her to do is work with her Republican colleagues to present a bill for discussion.

Medical sales and offering conservative options for pain management was his former career before being elected in 2016, but Rep. Wichgers from Muskego offers no hope or signs of relief to the sick, dying and disabled of Wisconsin that could benefit from medical marijuana.

Early in the beginning of the 2019 session, Rep. Wichgers made a hard stance against marijuana reform with public statements and supporting anti-cannabis event.

His public statements like “Based on experiences in other states, I remain 100% opposed to decriminalizing recreational marijuana” and “With regard to medicinal marijuana, I believe it is premature to consider legalization before its efficacy is confirmed scientifically. Only then, and with the assurance that it would be regulated as a Schedule II drug, would I support legalization” show just how dangerous this past pill pusher is. His support for the bill to increase penalties for butane hash oil (BHO) is a hard pill for Wisconsin to swallow.

Assembly Bill 599 to legalize kratom in Wisconsin is four (4) pages long, including the legislative analysis. As compared to Senate Bill 545 to legalize marijuana, which is fifty-eight (58) pages long. As you can see, legislation is as complicated or as simple as legislators make it.

Get on the horn and bug your legislators (especially Republicans) about these two issues and others that you care about. Help put the act in activism by taking action today! 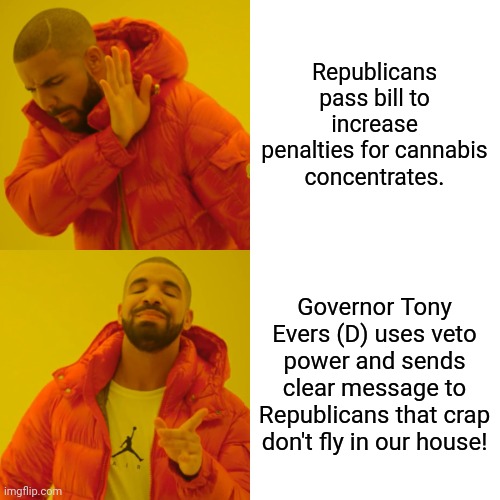